Mitral valve prolapse is one of the most common heart valve diseases, affecting more than 170 million people worldwide. And while it is usually benign, it can sometimes lead to cardiac arrest or even death – often without any warning signs.

With support from a Cardiology Innovation Award (CIA), funded through the generosity of the Cardiology Council, UCSF cardiologist Francesca Nesta Delling, MD, MPH, is working to identify high-risk patients and prevent devastating outcomes. “This can be a silent killer, and often patients who die are under 40,” she said. “The future is really all about early detection of disease.”

The mitral valve is located between the left atrium and left ventricle. It has two leaflets that open and close like French doors, allowing blood to flow forward when the left atrium contracts, and sealing shut when the left ventricle contracts, preventing blood from flowing backwards. “Some people develop mitral valve prolapse, a condition in which the leaflets are really long and floppy and don’t close well,” said Dr. Delling. Usually this is not problematic, but sometimes it progresses to mitral valve regurgitation, in which the valve leaks and blood flows backwards. Over time, a patient may require surgery to repair or, rarely, replace the valve.

Mitral valve prolapse can also cause a more serious problem. The leaflets are connected by thin tendons to the papillary muscles at the base of the heart. Floppy leaflets can pull on the papillary muscles, and that repeated tugging can cause fibrosis, or scarring. Scar tissue does not conduct electrical signals, and can interfere with the heart’s ability to beat properly. Some patients may develop ventricular arrhythmias – irregular heart rhythms arising from the ventricles, which are the main pumping chambers of the heart.

Dr. Delling is an expert in cardiac imaging, and has examined thousands of mitral valve prolapse echocardiograms, which are ultrasound studies of the heart. One type of cardiac imaging is magnetic resonance imaging (MRI), which uses a contrast agent called gadolinium. It can reveal chunky bright spots which represent replacement fibrosis or scar, an area of dead tissue that could contribute to ventricular arrhythmia (Figure 1). 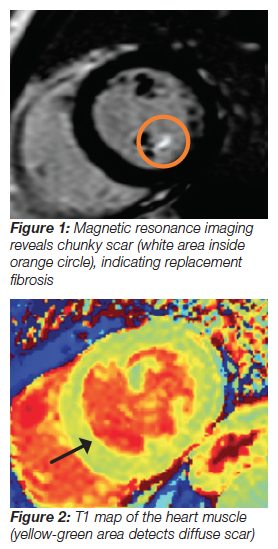 However, Dr. Delling noticed that not all mitral valve prolapse patients with ventricular arrhythmia displayed this chunky scar. “I wondered why I wasn’t seeing the replacement scar with gadolinium,” she recalled. That nagging question drove her to investigate further.

There is another type of fibrosis that looks like a lacey filigree, rather than a concentrated chunk of scar. However, this diffuse scarring is microscopic and can be widespread throughout the heart. “You need different tools to visualize different kinds of scars,” said Dr. Delling. She used another type of cardiac MRI technique called T1 mapping, which detects how long it takes for magnetic spins in different parts of the heart to relax (Figure 2). Because scar tissue is stiff, relaxation time in these areas is longer. Cardiac T1 mapping is currently used only in research studies, not clinical assessments. Dr. Delling was the first researcher to perform T1 mapping in mitral valve prolapse patients, and found that diffuse scarring was associated with ventricular arrhythmia.

By using both the standard gadolinium detection of chunky scar and the novel T1 mapping to detect diffuse microscopic scar, Dr. Delling hypothesizes that cardiologists could better detect both forms of scarring. “A doctor may just do the gadolinium enhancement and say, ‘I don’t see any chunky scar, so we don’t need to worry – I’ll see this patient in two years instead of six months,’” she said. But if the patient has undetected diffuse scarring, they could experience a serious complication in the meantime. Tragically, many of these patients are young. Indeed, one study demonstrated that 7 percent of sudden arrhythmic deaths in individuals younger than 40 were related to mitral valve prolapse.

While it is critical to prevent these terrible outcomes, it is difficult to pinpoint which patients are most at  risk. For every 1,000 people in the general population, up to 30 have mitral valve prolapse, and only one will develop a life-threatening arrhythmia. Cardiac MRI for detection of heart muscle scar is an expensive test, and unfortunately cannot be used to screen everyone with mitral valve prolapse. So Dr. Delling wants to identify those most likely to benefit.

The CIA grant provides Dr. Delling with seed funds to investigate this question. UCSF has a cohort of 580 mitral valve prolapse patients. While some patients have already recorded their heart rhythms using a Holter monitor or a wearable sensor called a Zio patch, grant funds allow her to gather this information for the entire cohort. This will allow her to determine which patients have complex ventricular ectopy, and are therefore at potentially higher risk.

The grant also enables her to perform cardiac MRIs to identify both chunky and diffuse scarring in 200 mitral valve prolapse patients. Some of these patients have complex ventricular ectopy, and some do not. Dr. Delling and her team are analyzing how well each type of imaging predicts arrhythmic mitral valve prolapse.

Harnessing the Power of AI

This is just the first step. “For every patient who develops life-threatening ventricular arrhythmia, there are many, many patients who will not,” said Dr. Delling. “We want to pick up at-risk patients when they are asymptomatic, some of whom don’t even have mitral regurgitation. But how do we determine which patients may be at risk and  could benefit from a cardiac MRI?” She decided to collaborate with UCSF cardiologist Geoffrey Tison, MD, MPH, an expert in using artificial intelligence (AI) to analyze big data, such as large sets of electrocardiograms (EKGs) – a test that measures the electrical activity of the heart. “Some studies have shown that patients with mitral valve prolapse with arrhythmic complications often have abnormal findings on their EKGs,” said Dr. Delling. These findings are often so subtle that even experts like her are unable to recognize them.

But AI is adept at teasing out hidden signals from mountains of information. Dr. Delling’s team fed all the EKGs from their mitral valve cohort into a computer. By labeling which EKGs were from patients with ventricular arrhythmia and which were not, they helped the computer learn to distinguish between the two groups.

“Then we fed in the same EKGs again, without the identifying labels,” said Dr. Delling. “From our preliminary data, the computer was able to discriminate with very high precision between the patients who have prolapse and ventricular arrhythmia, versus patients with prolapse but no ventricular arrhythmia.” She and Dr. Tison are now collaborating with Houston Methodist DeBakey Heart and Vascular Center, analyzing EKGs from DeBakey’s mitral valve prolapse patients and validating their model in a different patient population.

Beyond just sorting the two groups of patients, AI uses machine-learning algorithms to take it a step further. “The computer is actually able to pick up things that we ‘teachers’ don’t know about,” said Dr. Delling. For patients with ventricular arrhythmia, these include minute alterations in different segments of their EKG, which may be prolonged, or higher or lower than a patient without arrhythmia. In addition to paying for the study’s cardiac MRIs and Holter monitors, the CIA grant funds are supporting the salary of a computer engineer postdoctoral scholar who is dedicated half-time to this project.

Collaboration is the Key

“I learn so much from combining forces with experts like Dr. Tison,” she said. Her other UCSF research partners include cardiac electrophysiologist Zian H. Tseng, MD, Murray Davis Endowed Professor, and Arun Padmanabhan, MD, PhD, who is investigating how genetics shapes heart development before birth. “My own expertise is in mitral valve prolapse and conducting very fine imaging phenotyping,” said Dr. Delling. “I reviewed the imaging for all 580 mitral valve prolapse patients, describing each one in great detail: are one or both leaflets involved in their mitral valve prolapse? Is there tugging on the papillary muscle? Do they have mitral regurgitation?”

Unfortunately, many primary care physicians and even some cardiologists are unaware that arrhythmic compli-cations related to mitral valve prolapse, while rare, can be life-threatening. “Mitral valve prolapse should not be underestimated as being mostly benign,” said Dr. Delling. “We have to find better tools to identify patients at risk, especially those who don’t have regurgitation, a heart murmur, or any symptoms at all.” She hopes that AI might be able to use existing EKGs and echocardiograms to identify such patients who are currently under the radar. She also hopes her findings could help develop evidence-based guidelines to determine which patients should receive an implantable cardio-verter defibrillator before they experience a cardiac arrest or sudden death.

Dr. Delling deeply appreciates what the CIA grant allows her to do. “Private funding for junior investigators is so important,” she said, noting the steep challenges that clinician-scientists face when launching their own labs. “It’s a great way to bridge to larger grants.” The CIA funds helped Dr. Delling gather preliminary data, which she incorporated into recent grant applications to the National Institutes of Health and the American Heart Association. “I am very grateful for the Cardiology Council’s support,” she said.

In addition to the CIA-funded research, Dr. Delling is also pursuing many related investigations, including trying to identify genetic causes of both prolapse and associated arrhythmias. In the future, she hopes that her discoveries will contribute to a deeper understanding of the underlying causes of disease. “By understanding the mechanism, we could develop medical therapies that halt progression,” she said. “That’s really where the future is.”